The best months to visit the Everest base camp are the best time to trek in the Everest region, Khumbu Glacier. To do the trekking in Everest region and its base camp, 6 months (September, October, November, March, April, May) are the most suitable and most recommended. These months lie in the autumn and spring seasons. Trekking in the best months provides a perfect view of the Himalayan arena. The masterpiece of flora and fauna, mountain ranges, and overall exotic environment are the major attractions that welcome most of the national and international tourists in the Nepalese Himalayas. 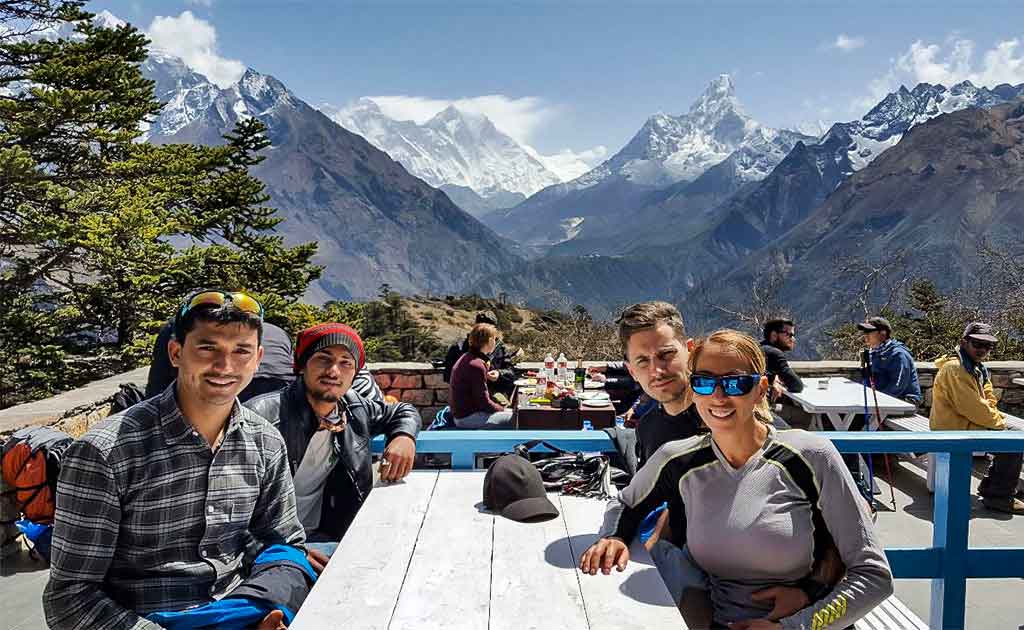 The weather in these months of best seasons remains clear amidst this time which offers a sky view with fewer clouds, distant flora, and fauna. You can enjoy the Everest base camp helicopter tour during these months in Nepal. For a country like Nepal with huge land and natural diversity, it is common to gain knowledge about all the possible seasons, their climates, and months lying in those seasons to be aware of possible situations. Reaching the height of 5,380m (17,600ft) is something really admirable.

You will encounter a number of tourists moving to reach a common destination, Everest base camp. This snowy landscape will surpass your excitement level of the mountain experience. The temperature remains moderate and the cold remains bearable (but only with proper clothing). Keeping these months insight as the best time for Everest base camp trek, you could not act negligently as anything can happen in the Himalayas. Rather you need to be ready for any kind of occurrences by concentrating on the aspects like the chance of rainfall, icefall, snowfall, unpredicted weather change, natural calamities, and so on.

If everything goes well with nature and environmental conditions, you will be able to gain perfect Himalayan memory to store in mind and take it along with you for a lifetime. Now, let’s check out more about the best months in which you can explore the Everest region with full-fledged enjoyment.

Everest base camp in March

March is the welcoming month for autumn.  The days are longer, warmer and the weather is more ideal. This season is busier than February (end of winter season) but not more than April and May. The temperature of the Everest region during this month is 25°C in daytime and -15°C at night time respectively. Everything is perfect with the weather in this month, as the sky remains clear with a small number of wandering clouds, the environment remains green, and the route remains less dangerous as many trekkers visit this arena during this period. It makes this trekking experience more memorial and unique.

Everest base camp in April

April falls in the autumn season when the weather is warmer and days are longer. The beautiful views of the Himalayas, flora, fauna, and overall landscape are the major attractions in this season. This season is completely safe and the climate and weather complement the place. The temperature of the Everest base camp is 10°C during daytime and -5°C during nighttime. In this season the place gets about 7 hours of sunlight which makes the place just perfect for sightseeing and photography. Wind speed also favors the Everest base camp trek during April.

Everest base camp in May

May is marked as the ending of spring and the start of the summer (or monsoon) season. But as the highest number of days fall in the spring season, this month is considered as the spring-seasoned month. The temperature of the Everest Region remains 10°C at daytime and -5°C at night time. The trekking in the season of May will give a lifetime unforgettable memory rewarding you with incredible sunrise and sunset views in the Himalayas. But, as the temperature increases, the number of bugs and insects rises. For this, the use of ointment and sprays will do the necessary job.

Everest base camp in September

September is one of the best times to visit Everest Base Camp and explore the surrounding. This month falls on the autumn season. The average temperature of the Everest area during the daytime is 15°C and falls to a minimum of 2°C during nighttime. In this time, the environment is so clear that trekking can be done with full excitement viewing all the scenarios of mountains, flora, and fauna around the territory. You can choose any packages from our list for this trekking but the most suitable one is Everest Base Camp Trek which is the standard route for exploring Mount Everest Base Camp and Kala Patthar. The auspicious festivals of the nation like Rishi Panchami and Teej offer heart-whelming cultural warmth which increases the flow of tourists to its higher level.

Everest base camp in October

According to the researchers, it is proved that October is the best time to explore the heavenly Everest Base Camp. The second week of October is the most appropriate time for this trekking as the skies remain clear, and if rainfall occurs, then also it will not last for a longer time. The average temperature during daytime remains 25°C and falls to -25°C during night time which is the lowest at this time. The rain falls during this month, but it won’t last for a long period. Hence, the weather becomes more attractive after the rain stops and a small amount of sun shines on the mountain and clear skies.

Everest base camp in November

November is also one of the best months for trekking to Everest Base Camp. This month, it is a little snowy in the Lhasa area, because of which there is the necessity of extra clothes.  The area remains clear because of which surrounding is as seen clear and extreme.  The area remains peaceful full of snow and water ponds, bringing more sparks in the scenario. The average temperature of Everest Base Camp during daytime reaches its maximum temperature of 12°C to 16°C during daytime and minimum to -7°C to 2°C during night time. During this period, you need not worry about excessive cold and heavy snow as it is the moderate temperature for Everest Base Camp.

Here's the list of best packages provided to you are:

Besides these packages, you can do solo trekking to EBC, free/discounted trekking, and many more. To enjoy the Himalayan panorama with us, you can simply call us on +9779851017030 or write us an email. All your queries will be sorted and your beautiful trek will be managed along with all necessary preparations.